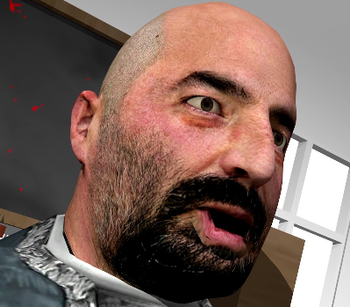 YouTube has had lots of channels that have posted deranged and surreal animated series since the very beginning. One of these channels is Pamtri, who blew up in popularity in early 2017. While the channel had started uploading surreal 3D animations for several months, its popularity only really kicked off with the SpongeBob SquarePants parodies "Mrs. Puff Has Had Enough

Pamtri's videos can be divided into four types:

Santiago appears in almost every video, regardless if it's an "In a Nutshell" video or not, and most often without any explaination. Nobody really knows who he is, or where he came from. The only certain thing is that at least one character will be killed by him.

There are other running gags as well, including a number of very recurring phrases and other easter eggs. As of March 2022, Pamtri has over 931 thousand subscribers.

Pamtri's channel can be found here

. If you're on Discord, you can also join their group here

Tropes in Pamtri's videos include:

You have read through this whole trope page. Now, YOU MUST DIE
Oh, okay
(gunshot)
SANTIAGO
Feedback