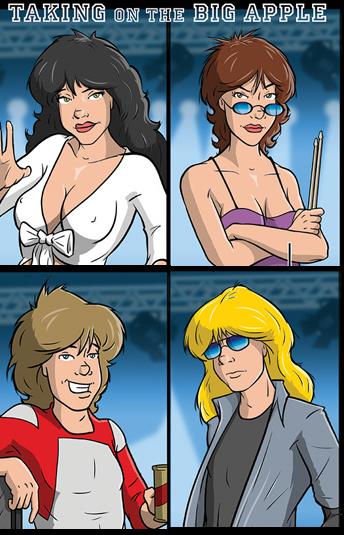 It's one thing to know it, but another to admit... clockwise from top, Troubles(Lorraine), Robyn, Jeff, and Bud
"If Garbo played guitar with Valentino on the drums, we'd still be nothing more than a bunch of common bums, so TUNE UP!"
— 10cc, The Worst Band in the World
Advertisement:

This comic deals with the adventures of four buddies who decide to start a rock group. It reflects a slightly embellished account of real events in the younger life of creator W.Byron Wilkins (assisted by his active imagination and a well-tuned sense of the absurd). It is set in 1977, hence the title, with flash-forwards to the later mature life of Author Avatar C. "Bud" Chambers, who in the present day is a widowed father of a teen daughter, wondering where his life went.

The full story of Plan 9 (From Outer Space), as so far revealed, is here

Tropes inexpertly played, by the creators of the critically declaimed sixth-worst album of the 1970s, include:

We're the worst band in the world, and we don't give a...