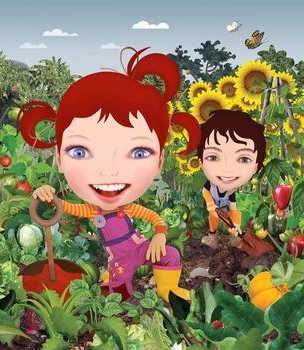 "Hmm... this seems like a nice sho— Oh God, what is that!?
Dirtgirlworld (2009-2010) is a Canadian and Australian children's television series aired on CBC, The ABC, CBeebies, and PBS Kids Sprout.
Advertisement:

The series uses 3D CGI animation combined with photomontage. The main characters are dirtgirl and Scrapboy, as well as their friends Ken the Weevil (who's a stuntman), Grubby (who's a grub), and Hayman (who's a scarecrow).