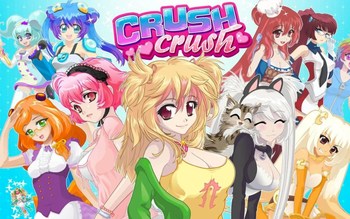 Crush Crush is a Unity Dating Sim Idle Game created by Sad Panda Studios as their first game. The basic premise of the game is that you meet various girls by wrecking some part of their life, apologizing, and then eventually becoming their lover. This game does not take itself too seriously, with many pop-culture references, fourth wall and meta jokes. It's available for free on Steam

. (On Steam, the uncensored version is a paid for unlock). In 2018, SPS have announced a visual novel named Hush Hush - Only Your Love Can Save Them with the same characters (seven of them, plus two more as stretch goals). It got funded on Kickstarter in three days.

Now it has a Gender Flip version called Blush Blush where you're dating cute boys instead of girls.