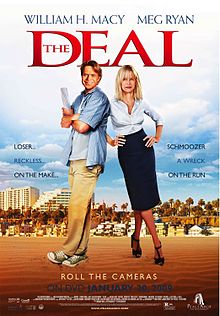 Cut To The Scam
2008 comedy film based on a 1991 novel where struggling Hollywood film producer Charlie Berns (William H. Macy) is on the verge of suicide when his aspiring screenwriter nephew Lionel (Jason Ritter) arrives from New Jersey with a script about 19th century British statesman Benjamin Disraeli. Charlie agrees to make the film, but only when he converts the literate PBS-style script (that he didn't read) into an action adventure Middle Eastern espionage film, Ben Disraeli: Freedom Fighter.
Advertisement:

He casts power-star African American Bobby Mason (LL Cool J), a recent convert to Judaism, in the title role and, after some creative wrangling with studio big-wigs and feisty project developer Deidre Hearn (Meg Ryan), whom he is instantly attracted to, he proceeds to set up production in South Africa. Charlie then lies to the studio, saying Bobby insists Deidre, who has purposely avoided Charlie, be sent to South Africa to assist on the production. She arrives, and she and Charlie eventually 'hook-up'. After Bobby is kidnapped by terrorists during the shoot, and the film is shut down, Deidre hatches a scheme to produce Lionel's original script on the 'Q.T.'. Using financing that must stay in Prague, Charlie and Deidre manage to film Lionel's original movie there, which goes on to receive seven Golden Globe nominations, making Charlie and Deidre the newest power couple producers in Hollywood.

No relation to the 2003 HBO television drama about Tony Blair and Gordon Brown.