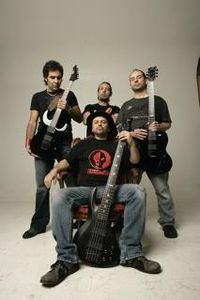 Dorso is a legendary Gore-Grindcore Metal/Jazz-Fusion band from Chile, formed in 1984 by Rodrigo “Pera” Cuadra and Yamal Eltit.

Their music lyrics, in Spanish/Spanglish, are based in horror movies, H. P. Lovecraft, alien invasions and more.