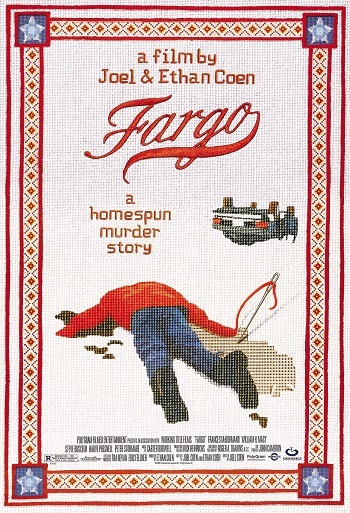 A lot can happen in the middle of nowhere.
"And for what? For a little bit of money. There's more to life than a little money, you know. Don'tcha know that? And here ya are, and it's a beautiful day. Well. I just don't understand it."
— Marge Gunderson

Fargo is a critically acclaimed dark comedy/crime movie from 1996, written and directed by The Coen Brothers. It stars Frances McDormand, William H. Macy, Steve Buscemi, and Peter Stormare. Taking place in the Upper Midwest circa 1987, the plot concerns Jerry Lundegaard (Macy), a bankrupt car salesman who stages the kidnapping of his wife in order to cheat a ransom out of her wealthy father. But then things go wrong.

Like many of the Coens' films, Fargo takes liberal inspiration from Film Noir, one of their favorite subjects, but rather than being a straight Genre Throwback (like Blood Simple and Miller's Crossing) or an Affectionate Parody (like The Big Lebowski and Hail, Caesar!), it's perhaps best described as a subversion of the genre. The story is a fairly straightforward tale of criminal intrigue and a dogged cop on a mission, but it derives much of its subtle Black Comedy from its setting, taking place in the famously friendly, folksy Upper Midwest. Likewise, Frances McDormand's character Officer Marge Gunderson is a famous subversion of the archetypal Hardboiled Detective, being a perfectly nice and well-adjusted police officer who spends most of the film galumphing around in a bulky parka while heavily pregnant.

McDormand won the 1996 Academy Award for Best Actress for her role as Gunderson, while the Coens won for Best Original Screenplay.

The film is famous for having almost none of the plot take place in Fargo, North Dakota. It instead largely takes place in Brainerd, Minnesota, but apparently that wouldn't have made as good a title for the film. It also popularized (or demonized) the Minnesota accent, with its singsong Scandinavian influences and northern twang. Super.note pronounced SOOPER

It's also famous for the urban legend about a Japanese tourist freezing to death while searching for the treasure that Buscemi's character hides in the film. You betcha.note Said tourist was in fact suicidal, and deliberately went there to die. She did make a crack about Fargo, but the state troopers misunderstood it, ya? It was enough to spawn a documentary about it

— sadly more based on La Jetée than the Coen Brothers' film style — and a fictionalized account starring Rinko Kikuchi.

starred Edie Falco as Marge, but despite its praise, it wasn't picked up. FX began airing an anthology series based on the film in 2014, with the Coens as executive producers.

This film contains examples of the following tropes, ja: