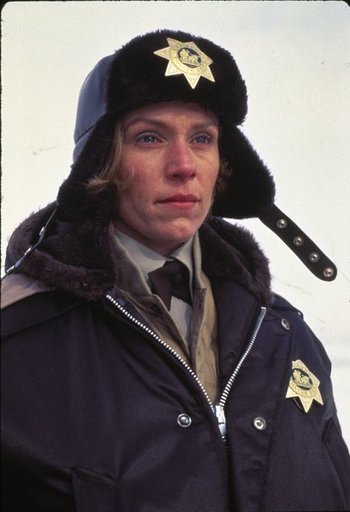 The place shown in this feature is real and identifiable. The police officers likewise are of this place. But something is awry. The cops are wearing uniforms with elements that do not look like the ones they wear in that place in Real Life. In extreme cases, the whole uniform will be wrong. This may well fly over the heads of viewers not from said jurisdiction, but to locals, especially those who have some kind of relationship with law enforcement, this may be a bit of an eyesore. Why couldn't the costume department make a bigger effort at authenticity?

This could be caused by several factors. If a show has a low budget and has episodes set in different places, faithfully reproducing various uniforms would likely be a demanding task. Another factor might be that the show is attempting to avoid legal issues based around things like trademarks or jurisdictional laws against impersonating a police officer or unauthorized wearing of a uniform. In other cases, it just might be that the producers are deliberately trying to obscure the actual setting for one reason or another.

This trope is mainly relevant in live-action visual media. It may be considered a super-trope to Generic Cop Badges and a subtrope of Hollywood Costuming.

Notably, works set in New York City or other major American cities often avert this trope. This may have something to do with the appearance of the NYPD uniform being familiar to many, perhaps also with some shows and films set in places like NY or Boston having a good enough budget to faithfully replicate the look. On the other hand, works, especially American, depicting Canadian Mounties often inaccurately portray them as wearing their distinctive, historical red dress uniform on a normal workday, something no doubt often done deliberately in order to play into the stereotype.