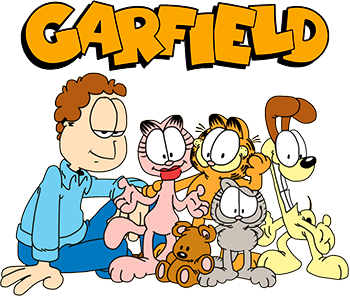 "Our only thought is to entertain you."note Left to right: Jon, Arlene, Garfield, Pooky, Nermal, and Odie.
Garfield is a long-running (since June 19, 1978) newspaper comic, written by Jim Davis. It stars Garfield, a sarcastic cat famous for his laziness, gluttony, occasional spurts of evil and avoiding of karma; his owner, Jon Arbuckle, a cartoonist who dresses badly, cooks badly and was long a complete failure with women (until, 28 years later, the veterinarian Liz finally gave in); and Odie, a really dumb dog with a penchant for licking, and the only animal who doesn't have "thought speech."note Except for that one time.

The strip began in the Pendleton, Indiana Times in 1976 as Jon (Davis' second strip after Gnorm Gnat), which already featured the core cast: Jon, Garfield (looking quite different), Odie (then named "Spot") and his original owner, Jon's roommate Lyman (best known for disappearing with no explanation). Many if not most of the Jon strips were later redone when it was retooled into Garfield. Upon being syndicated nationwide in June 1978, Garfield had a rough start, being slow to be picked up by newspapers, and many predicting it would be a Short-Runner. However, the first book collection, Garfield At Large, shot to the top of the New York Times Bestseller List, held the spot for nearly two years, and turned the strip into one of the most successful ever, generating much merchandise and multi-media projects including:

Jim Davis has stated that he created Garfield with the sole intention of making money. He decided to create a strip that would be popular with the masses, in order to be commercially successful. The fact that he succeeded says one or two things, depending on how cynical one is. On the other hand, at least he bothers to admit it.

Garfield's speech is completely internal, even in his animated version. Although it made animation much easier, fans wondered exactly how much Jon understood Garfield considering they couldn't actually hold a conversation. With that in mind, they started the trend of removing Garfield's dialogue

— or even Garfield altogether— from the comics. What results is a surreal trip into the mind of a very disturbed and lonely man, which quite a few people consider funnier than the original strip, even by Jim Davis himself. And going one step even further, Square Root of Minus Garfield proves that True Art Is Incomprehensible — and hilarious. It's also spawned

Garfielf, an intentionally So Bad, It's Good fanmade video. And last, but not least, there's Lasagna Cat, a bizarre series of videos in which actors for Jon, Garfield, and Odie act out certain strips in the series' history, while also making music videos as "tributes" to Jim Davis.

Probably holds the distinction of being the comic strip that features the most tropes whilst not naming any, except maybe Hating on Monday.

which now (as of 2020) links to the Nickelodeon homepage. A complete archive of every strip from 1978 until now can be found at GoComics.com.

The website was far more sophisticated back in the 2000s decade offering card games, eCards you can send to someone for a special occasion, animated videos, "Leave a message" ringtones, Italian food recipes, original music and a more extensive shopping market. However, around the mid-2010s all these features were discontinued implying budget cuts were made to the website.

On August 6, 2019, Nickelodeon parent Viacom announced that it had acquired all global rights

to the Garfield intellectual property (along with those of U.S. Acres) and that it would begin development on a new animated series for Nickelodeon. Davis retains the rights to produce the daily comic strips for the foreseeable future, though his involvement in future Garfield media is unknown. The title character would also go on to be announced as a DLC fighter for Nickelodeon All-Star Brawl in December 2021.

Not to be confused with another orange cat from a comic strip, Heathcliff.

"Garfield": Oh boy, let’s get this over with so I can eat my lasagna:

"You Both Have All Nine Lives"

After losing his final life, Garfield (alongside Odie) meets his creator, and tells him that he feels he was unfairly cheated out of his life. God agrees, saying he can have his life back, and thanks to a computer issue, Garfield is able to finagle nine more lives for himself and Odie.

Example of:
Bargain with Heaven

"You Both Have All Nine Lives"

After losing his final life, Garfield (alongside Odie) meets his creator, and tells him that he feels he was unfairly cheated out of his life. God agrees, saying he can have his life back, and thanks to a computer issue, Garfield is able to finagle nine more lives for himself and Odie.