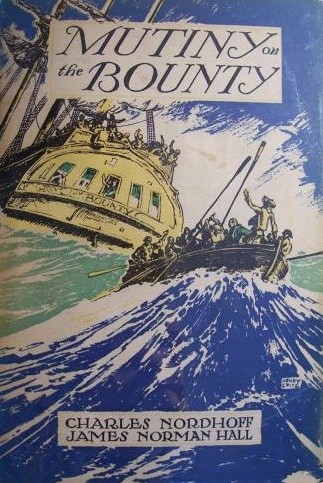 The Bounty Trilogy is the collective name given to three novels by Charles Nordhoff and James Norman Hall, recounting The Mutiny aboard HMS Bounty in 1789 and its aftermath. The crew of HMS Bounty, led by master's mate (third in command) Fletcher Christian, mutinied on the return leg of a voyage to Tahiti (called "Otaheite", its previous name, in the novels). Captain William Bligh and his loyal crewmen, set adrift in a dinghy, are left with no alternative than to try and make it through three thousand miles of open ocean to the Dutch colony of Timor. The mutineers, for their part, make a home on uninhabited Pitcairn Island—but things go badly.

The three books were published together in 1936 as The Bounty Trilogy.

The first novel was twice adapted to film. Mutiny on the Bounty (1935), starring Clark Gable and Charles Laughton as Christian and Bligh, won an Academy Award for Best Picture. The 1962 remake, a looser adaptation starring Marlon Brando as Christian, bombed at the box office.

Alternative Title(s): Mutiny On The Bounty