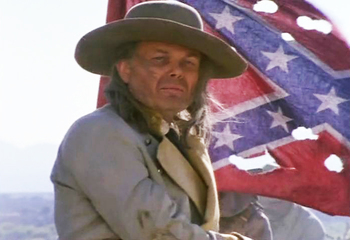 For some, the war never ended.
Our old uniforms, from our days of glory. I was saving them, so that we could wear them in death. And so we shall!
— The Man in the Iron Mask
Advertisement:

A character wears a uniform indicating membership to a specific group or organization, despite no longer being a part of that group (or the group no longer existing). Often occurs with ex-soldiers who later go freelance. This is generally used to indicate loyalty, especially if the group fell out of favor with the general population or the character left when the group changed its ideals. In a more negative interpretation, the character is simply unable to let go of the past (either as a Disco Dan or living in the Glory Days). For undead members of a group still in uniform after their deaths, see Jacob Marley Apparel.

In video games or serial works, this can sometimes be done just because Limited Wardrobe is in effect; the designers may not want to come up with a new design (or replace an iconic one), even if their situation changes. Naturally this can overlap with other, in-character reasons.

Despite having been more than seventy years since WWII, Klaus still dresses as though the Nazi Party is still a major power in Germany and Europe.

Despite having been more than seventy years since WWII, Klaus still dresses as though the Nazi Party is still a major power in Germany and Europe.