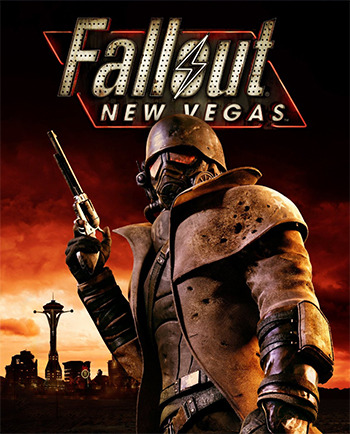 Blue Moon... you saw me standing alone...
"Sorry you got twisted up in this scene. From where you're kneeling, it must seem like an 18-carat run of bad luck. Truth is... the game was rigged from the start."
— Benny
Advertisement:

Fallout: New Vegas is the fifth (canonical) game in the Fallout series, developed by Obsidian Entertainment and produced by Bethesda. Released in 2010, it chronologically takes place after Fallout 3, but it is not the next numbered main game in the series. A good chunk of the development team were exiles from the late Black Isle Studios — responsible for Fallout 2 and the canceled Van Buren — and the game returns to the west coast setting of the originals. Thus, in a way, New Vegas serves as more of a direct sequel to Fallout 2 than the actual Fallout 3, wrapping up the region's Myth Arc while opening up new possibilities for future stories. Like its predecessor, New Vegas is a first-person (with optional third person) Action RPG.

It's 2281, and the Mojave Wasteland is an okay place to live. It doesn't have as many problems as most places do thanks to Mr. House, a pre-war business mogul who prepared Las Vegas for the Great War. Some even say he rules the city to this day, from his shining tower at the Lucky 38 Casino. But that may not be the case forever: two superpowers, the rising federation of the New California Republic and the slaving horde of Caesar's Legion, have begun staking claims in the region, coming to blows over Hoover Dam, and New Vegas is caught in the crossfire.

That's all somebody else's problem, though. You? You're The Courier, one of the best messengers around, as long as the package isn't too big. And this one really isn't. It's almost boring, even. But hey, you get to bring it to New Vegas, the biggest, brightest city in the wasteland. Should be pretty fun, right? Guess again. Only a few days into your trip, a mysterious man in a checkered coat and his posse of leathered-up thugs shoot you in the head and take your package, leaving you for dead in a shallow grave. Normally you would be dead now, but luckily, you manage to cling to life just long enough for a friendly robot that thinks he's a cowboy to dig you up.

The robot drops you off at the local doctor, and within a few days you're back on your feet, with most of your brain intact and three clear goals: finding out what was in that boring little package, getting it back, and delivering it — after all, it's your paycheck on the line. Besides, they don't call you The Courier for not delivering things. As for who you deliver it to, though...

The game has four DLC add-ons:

The four add-ons are advised to be played in the order they were originally released, as listed above. Together, they form a Myth Arc, along with potentially-overlooked details in the main game, foreshadowing events and characters in later add-ons, all building up to the confrontation with Ulysses in the Divide.

Finally, in February 2012, the Ultimate Edition was released - the game and all of its downloadable content in one package.

As its predecessors, Fallout: New Vegas benefits from a lot of content crafted by the community, from silly inoffensive content

With the right skills, you can make a chef sad by getting him to talk about traumatic childhood memories.

Example of:
Made Myself Sad

With the right skills, you can make a chef sad by getting him to talk about traumatic childhood memories.