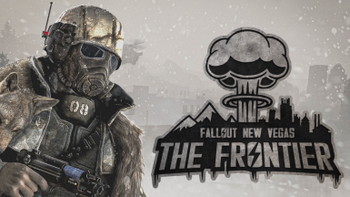 The Nuclear Winter is here.
Advertisement:

is a mod for Fallout: New Vegas released in January 15, 2021, eleven years after the game's release. Set around the same time as the events of the main game itself. Instead of the Mojave Wasteland, however, the mod introduces players to the titular Frontier, a cold, desolate waste surrounding what was once Portland, Oregon. The main plot focuses on a conflict between three factions. First are the NCR Exiles. Led by General Blackthorne, the exiles deserted from NCR after being betrayed by President Kimball, and have journeyed to the Frontier in order to get the supplies and weapons they need to return to California and oust Kimball from power. The NCR Exiles are currently engaged in a war with the Northern Legion, a sub-group of Caesar's Legion led by the enigmatic Legate Valerius. Valerius hopes to not only conquer the Frontier for Ceaser, but also to institute necessary reforms that will allow the Legion to function as a standalone nation rather then the warband it is now. Lastly there are the Crusaders, a Brotherhood of Steel splinter cell that has embraced the theology of Mormonism. The group seeks to avenge the Brotherhood's loss at Helios One and also save the soul of the wasteland.

The mod features three distinct main questlines, along with dozens of choice driven open ended side quests. In addition to a large, new setting, the mod features drivable vehicles, including Vertibirds.