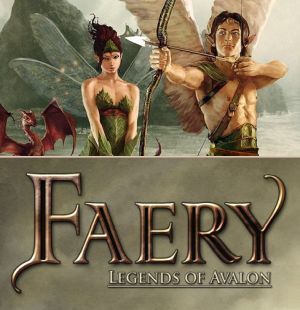 Faery: Legends of Avalon is a Fantasy RPG by Spiders. It was their first solo game, being released in 2010 for Xbox 360, PS3, and Windows. The game is available on Steam, and a free demo can be found in the PlayStation Store.
Advertisement:

Faeries were once closely connected to the mortal world, but now find themselves being forgotten, and the places they inhabit are beset by problems. The customizable player character is a faery who is woken by the king of the faeries to do something about it. This involves traveling to several different mythical locations (a giant tree, a ghost ship, and a city of djinn) and solving problems afflicting them.

As is fitting for faeries, players move around each map by flying — the levels are as spread out vertically as they are horizontally. There's free movement during exploration, while for combat, there's a turn-based system similar to that often found in Eastern RPGs.