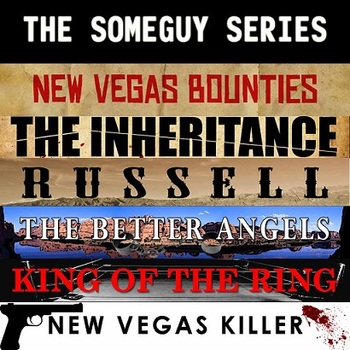 The Someguy Series is the collective name for a series of mods for Fallout: New Vegas by modder someguy2000, providing an overarching narrative that adds new locations, quests and stories to the Mojave Wasteland.

The genesis of the series began with a mod created for Fallout 3, Potomac Breaksnote back then, he was going by the name jarheadwriter2000, which has the player working as part of a group of bounty hunters under the orders of a man known as Marshall Cooper.

Someguy2000 was not pleased with the progress of the mod and decided to remake the mod in New Vegas under the title New Vegas Bounties, which follows The Courier as they enlist in a bounty-hunting operation led by its enigmatic founder, Steven Russell, which puts the player into conflict with a variety of villains and a Greater-Scope Villain in the form of "The Judge", the psychotic leader of a competing company. Though the premise was simple, the mod was well received and became well-known for adding many more quests (filled with pop culture references) and hours of gameplay. Two more sequels followed, which added more bounty-hunter quests into the world and expanded the story to focus on The Courier's search for "Marko", an Ascended Extra (mentioned in Fallout 3) who is running a gang of raiders in the Mojave Wasteland and dispatched several assassins to kill The Courier.

Several more mods followed that tie in to both the Bounties series and other aspects of the Mojave Wasteland, requiring a master file that keeps track of certain plot decisions, even conferring additional content for players who've made the journey through the entire series. These mods include:

Someguy has gone on record stating that there are several mods he planned but never released, including the aforementioned Siege of Firebase Zulu (inspired by Zulu and The Siege of Firebase Gloria, among others), Sinners and Slaves (set during a Legion slave uprising in Flagstaff) and Murder Inc (a ''Fallout 4 mod intended to be a Film Noir inspired murder mystery/hitman mod, that was set to include Gray-and-Gray Morality and the return of Bobby Bass as a quest giver), but these projects were never finished for varying reasons. A

The master file regulating all the mods can be found here

, with links to all the mods themselves in the page.

Other than modding, someguy has also done Let's Plays and mod reviews on his YouTube channel which can be found here

Tropes from the entire series: