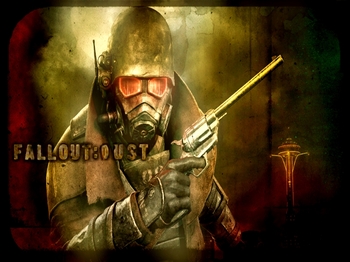 "Stay the hell out of the Mojave..."
Advertisement:

is a Game Mod for Fallout: New Vegas that could be described as New Vegas meets DayZ minus actual zombies.

Set 20 years after the events of the game, the Mojave is definitely not an okay place to live, not anymore. It is a dog-eat-dog ruin; where tribals, cannibals and survivalists battle it out for their very lives against the hostile wasteland (and each other), Hoover Dam is all but spent, New Vegas is nothing more than a ruin infected with the same Cloud that plagued the Sierra Madre and the NCR's remaining outposts in the region are shooting just about everyone on sight. But instead of someone like the Courier, the player is nothing more than just another survivor lucky to be alive. All you could do is find a way out, alive...if you can.

Most of the difficulty comes from an overhaul in game's balance, and DUST plays much more like a survival game than Vanilla. Ammo and supplies are rarer, low quality ammo are much more common than standard bullets, equipment is usually found in very poor state and wears quicker, carry weight capacity is greatly reduced, limbs are crippled quicker, the hardcore needs raise much faster, food and water are much harder to find (almost no harvestable plants, no more functional plumbing inside, many of the natural water sources are dry), NPCs and critters (both neutral and hostile) don't show up on the compass, and there's now a sanity meter.

Has a spiritual successor in the form of Fallout Frost; a similar Survival Horror inspired Fallout mod made by the same author, this time taking place only a couple of years after the bombs dropped.

An official trailer can be found here