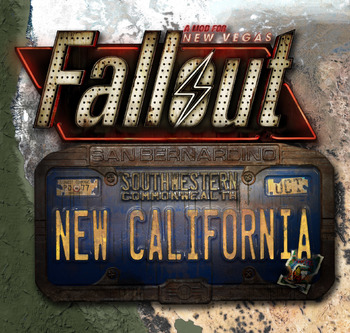 Featuring an entirely new worldspace, main quest, voice acting, and more. Think of it as one of the possibilities for The Courier’s multiple choice past.

It’s 2260, and Vault 18 is an okay place to live. Tucked away in the heart of the San Bernardino Mountains, it’s secrets have been protected by solid rock walls and the tireless efforts of the legendary Wasteland Scouts. Coach Bragg drills his Vault Ball team with military efficiency, believing that discipline and character will help bring order back to the war-shattered world. Dr. Rossman might be a little strange, but his heart’s in the right place. After all, you don’t get to be a Wasteland Scout without a good head on your shoulders.

The Hydroponics Lab provides plenty of cloned food, and the security system keeps any unwanted individuals out. The main struggle that Vault society faces is one of manpower.

That is where you, the Star Player, come in. Orphan. Loner. Mutant. And now, you’re thrust headlong into the war outside. Whether you like it or not.

After the events of the big Vault Ball game, and being eased into the adventure in relative safety, a deadly internal conflict forces you out of Vault 18 and into the deserts of The Pass.

There’s a four-way conflict going on, with participants familiar to the franchise and others that are completely new.

You can help tip the scales of this conflict to either side, in a typical series fashion. Or you can kill them all, and let God sort them out.