Literature / Born on the Fourth of July 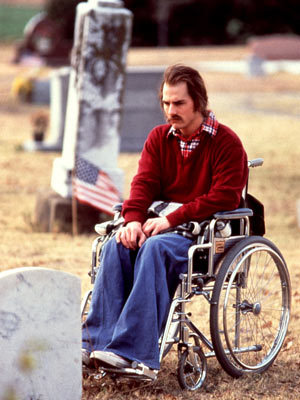 Ron Kovic: They burned the flag and they demonstrated against us; it's on the cover of the paper today. They have no respect. They have no idea what's going on over there, Mom - the men that are sacrificing their lives. People are dying every day over there, and nobody back here even seems to care. It's a bunch of goddamn shit if you ask me!
Mrs. Kovic: Ronnie, don't take the Lord's name in vain - not in front of the children. I agree with everything you say!
Advertisement:
Ron Kovic: I served my country - and they just want to take from it - just take, take! Love it or leave it, that's what I think.

The autobiography of Vietnam War Vet. Ron Kovic, Born on the Fourth of July was published in 1976. In 1989, the film version directed by Oliver Stone and starring Tom Cruise as Kovic was released. Stone won his second Oscar as director, his third overall, and Cruise got his first Oscar nomination. This is also his second film about The Vietnam War, following Platoon and followed by Heaven & Earth. These three films are often said to form a "trilogy", although they merely share subject matter and do not take place in a shared continuity.

Ron Kovic, a young man from Long Island, goes off to fight in Vietnam. During his second tour of duty, Kovic accidentally kills a fellow soldier, Private Wilson, which deeply scars him emotionally. During a firefight, Kovic is permanently paralyzed from the waist down. Once he is discharged, Kovic comes home a changed man. He feels that his country hasn't done much of anything to help his fellow Vietnam veterans. Subsequently, he joins the anti-war movement. And goes to Mexico.

Alternative Title(s): Born On The Fourth Of July