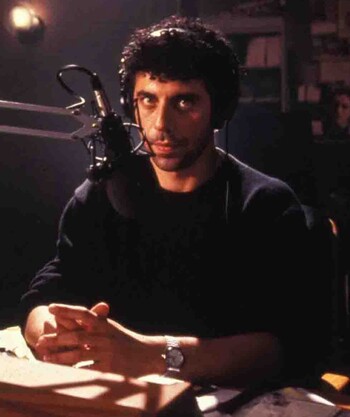 The last neighborhood in America.
Talk Radio is a 1988 film by Oliver Stone, adapted from a play of the same name by Eric Bogosian and Tad Savinar. It is a drama which is loosely based on the 1984 murder of Denver talk radio personality Alan Berg by white supremacists.
Advertisement:

Barry Champlain (Bogosian) is a caustic, confrontational shock jock who revels in condescending to his listeners. The story unfolds over the course of a single broadcast, as his show is about to be picked up for national syndication. Yet despite his sense of humor and imminent success, Barry is depressed and isolated from his loved ones. And he plans to continue his pattern of self-destruction by subjecting his fans to a marathon of abuse.