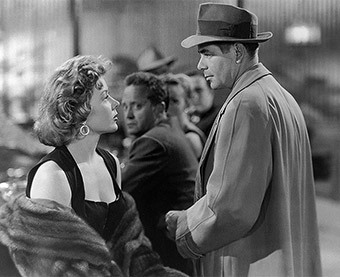 The Big Heat is a 1953 Film Noir thriller, starring Glenn Ford, Gloria Grahame, and Lee Marvin in one of his first big roles.

Ford is police detective Dave Bannion, who investigates the suicide of another cop, Tom Duncan. Duncan's death is in fact a suicide, but his mistress, barfly Lucy Chapman, refuses to accept this and demands that Bannion investigate. Shortly thereafter Chapman is murdered — it turns out that Duncan was a crooked cop in deep with the local organized crime outfit, which is afraid of drawing attention from the cops. Bannion insists on investigating the Chapman murder, even when facing resistance from the police commissioner, who is in the mob's pocket. The mob retaliates by trying to kill Bannion, but they kill his wife by mistake. This turns Bannion into a One-Man Army bent on vengeance.

The Big Heat is considered a late-career highlight for its director, Fritz Lang. It has a place both on the National Film Registry and Roger Ebert's Great Movies List.