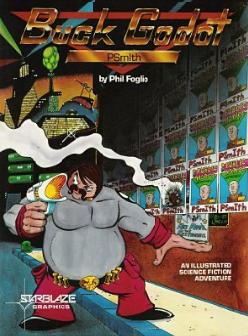 Buck Godot: Zap Gun for Hire is a science-fiction/action/comedy comics series by Phil Foglio, featuring the adventures of private detective/bodyguard-for-hire/former-X-Tel-security-chief Buck Godot, operating out of the Lawless planet of New Hong Kong.

The supporting cast includes Al, who manages Buck's favourite bar (and who looks like a short green cartoony version of the critter from Alien...his name is short for Alvin), and Madame Louisa Dem Five, who is a pillar of the local *ahem* service industry.

The series started as a string of short pieces in various anthology comics, some of which were collected in the first Buck Godot: Zap Gun for Hire collection. In these stories, Buck protects a woman pursued by fanatical sun-priests (who are later expanded upon in The Gallimaufry storyline), finds a lost heir (despite the hindrance of being followed around by a freelance conscience), defends a cargo ship from space pirate attack, and attempts to learn the secret of teleportation from an enigmatic alien with the fate of worlds hanging in the balance.

There's also a one-off graphic novel, PSmIth, and an attempted ongoing comic book, which folded after a single story arc due to scheduling and other problems; however, that story arc, The Gallimaufry, is the crowning achievement of the series, with the added length allowing for new levels of depth and complexity in both plot, world-building and characterization, and with Phil's artwork being significantly more advanced by this time.

Following the success of Girl Genius, the original series was released online in web-comic form

. The last installment of The Gallimaufry went up on June 20th, 2009. The following week saw a reprinting the three-page "True Story of the Winslow". And that appears to be that. (Almost.

) One of the original short stories (the one with nudity) is not included at the above site. We're sure you can find it if you look hard, though (by "look" we mean 'give' and by "hard" we mean "Phil Foglio your money"

NOTE: It appears that he's taken down the free access to the comic; therefore all the links below are currently inactive, going to an error message instead. Links are being left in for the time being, in case the comic returns.

Godot Was Here.
The Winslow is here. He's everywhere. All hail.
HI!