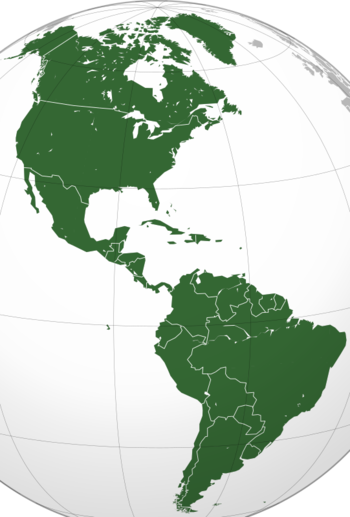 United States, Canada, Mexico, Panama, Haiti, Jamaica, Peru,
Republic Dominican, Cuba, Caribbean, Greenland, El Salvador too!
Puerto Rico, Colombia, Venezuela, Honduras, Guyana, and still,
Guatemala, Bolivia, then Argentina, and Ecuador, Chile, Brazil!
Costa Rica, Belize, Nicaragua, Bermuda, Bahamas, Tobago, San Juan,
Paraguay, Uruguay, Suriname, and French Guiana, Barbados, and Guam!
North and South America, also called America by most Hispanic speakers (not that used in English due to the US confusion). Two land masses of immigrants: The first peoples came from Asia on foot, via the Siberian-Alaskan land bridge and diversified into the native peoples of the continents. Then the Vikings found Canada by way of Greenland and didn't do very much. Then
Advertisement:
Christopher Columbus tried to reach India by sailing West, and landed in the Caribbean instead. Hilarity Ensued.

The continents of America were populated at some point during the Ice Age. While it was often held that people came first through the stretch of Bering (the one mentioned above), now it has been theorized and mostly confirmed that the first people came not from the north, but from the south in the same way of the people who afterwards populated Australia and most of Oceania's islands, as shown by the fact that the first signs of civilization are found mostly in South America: the city of Caral, first city of the continent, is the prime example.

They were also home to various different and unique cultures, the most representative ones being the Aztecs in North America, the Mayans in North and Central America, and the Incas in South America. Try not to get them mixed up.

The arrival of the Europeans changed everything, in general, the diseases and the actions of the people who came killed many of the Amerindians that lived before and destroyed many expressions of their culture. However, what happened in particular to the indigenous population was something that varied between the territories: in the realms that the Spaniards created (hence the appearance of the Viceroys) the natives were assimilated and given protection (at least on paper), most notorious is the nobility that survived the civil wars that the Spaniards exploited as they kept some of their previous privileges. In the Portuguese and French holdings the natives were treated in a similar way, although not as active.

This didn't mean that Amerindians were not exploited, that was something that did happen through the actions of the Conquistadores and rulers, but there were people who honestly tried to protect them such as Bartolome de las Casas, who eventually convinced the then King Charles I to pass stricter laws of protection for the Amerindians note Queen Isabel the Catholic had left as one of her last wishes the protection of the inhabitants of America that resulted in abolishment of most of the properties of the Conquistadores.

On the other hand, while the Church was involved in the destruction of material that was culturally invaluable, it also protected the natives (the very argument that Amerindians had souls was something proposed by Catholic theologists), gave some of the original languages an alphabet and written forms in order to keep them alive and encouraged the creation of the Cuzco School of Art.

What happened to the Amerindians on the English and Dutch holdings is known history.

The "correct" term of calling the continents is something disputed and depends on the language: most of the speakers of Romance and Asian languages refer to the continent as America, uniting South and North and seeing them as subcontinents of a whole and adding one more subcontinent, Central America, to make allusion to the nations between Mexico and Colombia; anglo-speakers, however, tend to call the continents in plural form, and usually include Central America as part of North America.

If you're looking for the country that's frequently referred to as "America", that's The United States.

The term "American" is something of debate and its roots are often found in the identification of the countries of the continents: the Spanish and Portuguese called American anyone who was born in the continents, a trend continued by the nations of Latin America; the English instead named the inhabitants of its colonies as Americans. Which terms must be given priority is something that won't be discussed here.

Fun Fact: The formal Spanish and Portuguese terms to call an American, as in someone born in the US, is estadounidense and estadunidense respectively; its rough equivalent in English would be Usonian, a term used by the architect Frank Lloyd Wright. That's very awkward in all English dialects because it's never used and the proper term, in all English dialects, for someone from the United States is American.