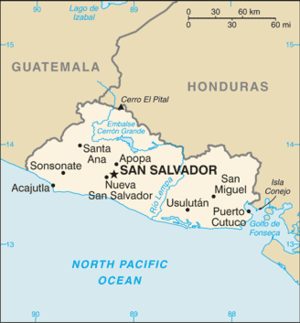 El Salvador, which is Spanish for The Savior and officially the Republic of El Salvador (Spanish: República de El Salvador), is a little Central American country squeezed right between Honduras, Guatemala and the Pacific Ocean.

While small in size, it is considered an important economic hub for Central America thanks to its official adoption of the United States dollar (USD) and for its close ties to the United States with Salvadorans being one of the largest hispanic groups living there.

Once upon a time, the land was inhabited by Mayas and other Mesoamerican cultures you don’t hear too much about (like the Pipil and Lenca civilizations). When the Spanish came along, the tribes resisted the conquest for a long time, but were eventually dominated by the 1530s.

The land was part of the General Captaincy of Guatemala until the Mexican Independence, when all the countries of Central America lost their status as Spanish dependencies and joined the new Mexican Empire. However, unlike his neighbors, El Salvador didn’t want to join The Empire, so they had to convince them… with military power… just in time for the other countries to decide not to join Mexico but to form their own federation. Oh well.

Since then, El Salvador has been a struggling country plagued with economical problems and military coups; their lands were fertile enough to attract the attention of the United Fruit Company (you know, the one who instigated most of the Banana Republics of the region.)

In 1969, as a result of the political tensions originated by the United Fruit Company’s administration of the zone and Salvadorans being brutally persecuted in Honduras, El Salvador went to war with Honduras in The Football War, proving that Association Football is indeed a Serious Business (in any case, the football issue was just the trigger, the resentment had been piling up since way before that). The military victory was to El Salvador, who almost reached Tegucigalpa (Hondura's capital) before their supply lines collapsed which caused their entire advance to stall. This benefited Honduras as the Organization of the Americas forced both nations to stop the fighting and El Salvador not only was forced to withdraw its forces but also they had to take in hundreds of thousands refugees, giving Honduras a victory-by-default. The bad management of the war from the government’s part, coupled with all the problems in the country and the lack of support to the expatriates from Honduras led in 1980 to a civil war that only ended in 1992, but the turmoil still lingers today (to the point it is considered the murder capital), so it was not very recommended to visit the country, though in the recent years, it has become more modernized and safer in the middle-class neighborhoods and shopping centers.

The Country in the Modern Age

The considerable number of Salvadorans that fled to the United States during the civil war has made El Salvador politically, culturally and economically depedent on the United States due to family remittances, exports and imports, leading to the two major political parties; the right-wing A.R.E.N.A, and the left-wing F.M.L.N, being generally pro-United States, no matter the current administration. Also, they were one of the few countries that recognized Taiwan rather than the Popular Republic of China until Salvadoran president; Salvador Sanchez Ceren (F.M.L.N), out-of-the-blue announced that they would cut ties with Taiwan note (The Taiwanese government claims that they cutted ties with El Salvador after the F.M.L.N government wanted the Taiwanese government to heavily invest in Puerto La Union, a coastal port built in the Salvadoran part of the Gulf of Fonseca (a gulf shared with Honduras and Nicaragua), a port that many analysts considers to be a waste of infrastructure and money.) in favor of China in August 2018.

El Salvador was one of the countries that sent troops to Iraq during The War on Terror from 2004 to 2008, being the only Central American country to do so and one of the last forces to leave Iraq after the occupation ended.

One curious (so to speak) detail about El Salvador is that it’s the only country in the region without an African population. This is because it has no coast on the Atlantic and the fact that a dictator in the 1930s issued race laws prohibiting the entry of Africans, Gypsies, Arabs, Asians and others to the country. This has led to the country being overwhelmedly Mestizo (people of both European and Native American descent) with a notable white and Palestinian population.

DJ Keoki was born in El Salvador. Other people with Salvadoran ancestry include the actress Anita Page and the model Christy Turlington.

El Salvador is known for trying too hard to industrialize and modernize after the peace accords ended the civil war with their government even adopting the U.S Dollar as their main currency, but they are always being outpaced by Guatemala, Costa Rica and Panama in foreign investment and tourism (mostly due to political corruption, gridlock, mishandling of funds given by the United States and gang-related crime). Their rapid urban industralization and modernization left the poorest neighbourhoods and rural towns in a state of disrepair that is still present to this day.

In American Media, El Salvador is almost non-existent (have you seen any tropes about its people or culture?) due to many factors not limited to its small size and history of just being another Banana Republic of the region until its twelve years-long civil war (1980 - 1992) led to hundreds of thousands of refugees to leave for the United States. Even today, El Salvador is only used to talk about gangs, gang culture and illegal immigration in TV shows and movies with its government being blamed for "allowing" the creation of the MS13 and 18th Street Gangs (In reality those gangs were formed in California but many of their members were deported back by the thousands to a war-torn El Salvador during The '90s by orders of Bill Clinton and made it their de facto headquarters by the late-2000s).

The Capital of El Salvador; San Salvador City note (originally named Great San Salvador but after a few near-apocalyptic earthquakes...), is situated in the middle of the country in the Valley of the Hammocks; a very mountainous and temperate area often affected by earthquakes (thus the name). The city itself has been described as a miniature Los Angeles (it's officially a sister city) built in a green valley rather than a dry desert. Nearly all the international commerce and investment is done there and it shows as it's the only city that can be considered modern by global standards but still lagging behind Guatemala City, San Jose (Costa Rica) and Panama City.

The city is divided by sectors; corporate, industrial and commercial. In between there are a combination of middle-class and lower middle-class neighborhoods and parks with the poorer neighborhoods mostly being separated or in the mountainous areas close to the entrances to the city proper.

One funny aspect of the city is that it shares a section named Antiguo Cuscatlan (Old Cuscatlan a.k.a Old Jeweled City) with the neighboring La Libertad Department (State) where the United States' citadel embassy is located, one of the biggest embassies in the continent.

Some examples of El Salvador appearing or being mentioned are:

The flag's blue and white stripes allude to its past affiliation with the Federal Republic of Central America. At the center is the coat-of-arms, which also recalls the Federal Republic's triangular seal containing five mountains on a sea (symbolizing its five member states), above which is the Phrygian cap of liberty and the rainbow of peace. Behind the seal are five flags (also recalling the Federal Republic), and is surrounded by a garland of fourteen laurel branches, representing the country's Departments: Ahuachapán, Cabañas, Chalatenango, Cuscatlán, La Libertad, La Paz, La Unión, Morazán, San Miguel, San Salvador, San Vicente, Santa Ana, Sonsonate and Usulután.