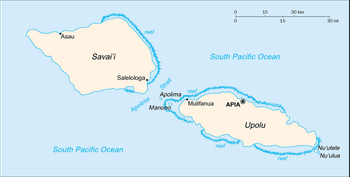 The land that's produced almost as many great wrestlers as Parts Unknown.
"But let's forget that bullshit about the American Dream. The important thing is the Great Samoan Dream."
—Dr. Gonzo, Fear and Loathing in Las Vegas
Advertisement:

The Independent State of Samoa (Samoan: Malo Saʻoloto Tutoʻatasi o Sāmoa) (do not confuse with the American Samoa, that's another thing altogether, though they share a language and some culture) is a nation of two big islands (well, comparatively) and two tiny islands between them. It is west of the American Samoa, by the way.

The first Europeans called the islands Navigator Islands because of how good the seafaring skills of the Samoans were. Of course, they were mostly hostile towards them. Sound familiar?

Germany and the United States claimed the territory until the beginning of the 20th century, when they split the islands: west for Germany, east for America. During the first World War it was taken by New Zealand; they administered it until 1962.

During said administration, a big part of the population (a fifth) died of influenza (probably arriving on a ship) and suffered what they called Black Saturday: on a Saturday they did manifestations pacifically (like they used to do, by the way)… only to be dispersed with machine guns. The New Zealand government has apologized for the incident, however.

In 1962 they became the first Pacific country to declare independence as Western Samoa. In 1997 they changed to just Samoa. To the American Samoans however, they still are Western Samoans. After all, identity is a Serious Business.

In 2009, Samoa became the most recent country to switch the side of the road they drive on. However, bucking the trend of the 20th century, they switched to driving on the left. This made it easier to import cars to the country from the biggest auto manufacturers in the region, namely Japan and Australia. The change also made it easier for members of the large ethnic Samoan communities in both Australia and New Zealand to ship their used cars to Samoa.

As a last note, the place seems to be a breeding ground for professional wrestlers, though it must be said they also come from other islands of the region.