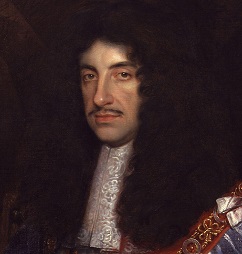 The Merry Monarch.
Here lies our Sovran Lord, the King,
Whose Word no-man relies on,
Who never said a foolish Thing,
Or ever did a wise one.
— John Wilmot, Earl of Rochester, Mock Epitaph on Charles IInote It is said that when Charles read this, he replied, "You must remember that I am an English King: my words are my own, but my actions are those of my ministers."
Advertisement:

Charles II of The House of Stuart, (29 May 1630 – 6 February 1685) King of England and Scotland, is most famous for restoring Stuart rule in England after the English Civil War and the days of the Protectorate. He's known as "Old Rowley" and also as the "Merry Monarch", mainly because he removed bans on entertainment like plays and bear-baiting. He also allowed women to play on stage, a fashion picked up by him during his French exile, and previously unheard of in England. One of these was Nell Gwynn, perhaps the most infamous of his many, many mistresses.

His reign was somewhat marred by the return of the Great Plague (i.e. The Black Death) in 1665 and the Great Fire of London in 1666 (although he did participate in the fire-fighting and rewarded the firefighters with a purse of 100 guineas). There also was the "Popish Plot," a brief "reign of terror" of sorts, wherein the English populace, driven by the lies of one Titus Oates and other "witnesses" of his ilk, degenerated into paranoia and fear of Catholic uprisings and invasions. Charles, like his father, was something of an autocrat in intent and although he had promised to work with Parliament when returning from exile he clashed with his legislature constantly, most infamously over the issue of his brother's succession for which he dismissed the body, ruling alone. Continuing political tensions led to one plot against him and his brother to restore a "government of the Cromwellian style" which was foiled. Implicated in the plot was Charles' illegitimate son the Duke of Monmouth who was exiled to the Netherlands (he returned after his father's death in an attempt to overthrow James II and have himself declared King for which he was executed).

Apart from these events, Charles's rule wasn't all that eventful, another war with the Dutch and the king's being presented with England's first pineapple aside. The Dutch war did have some significance long-term, as it was during this war that England conquered the Dutch colony of New Netherland, which his government divided into the new English colonies of New York (named for Charles's brother, Prince James, the Duke of York), and New Jersey.note The ambiguous terms of the colonial grant dividing New York from New Jersey have led to 350 years of squabbling between them

. Charles also granted the colonial charters of Pennsylvania (which was at least partly carved out of the territory of old New Netherland) and Carolina (which was named after him and his father and which quickly split into northern and southern halves) with substantial concessions to men who had helped him win his throne (or in the case of Pennsylvania, those men's heirs). He is also credited with introducing the periwig to the British isles. This type of long, curly wig (seen in the portrait above) became extremely popular and is now synonymous with European fashion in the late 17th and early 18th centuries. Part of the reason for its success, along with the fact that King had one, was that it immitated the long hair fashionable amongst men in the mid-17th century whilst allowing the wearer to have his natural hair cut very short thus avoiding the common problem of head lice.

One thing that irks folks about Charles II was his notable dishonesty (perceived or otherwise) about his religion: he declared himself a Protestant Anglican (lest Parliament should be in an uproar), then "converted" to Roman Catholicism on his deathbed. Catholics and Protestants disagree about which is the true religion, but both join in insisting he should have been more forthright about it. "'He could not have resisted without losing his throne?'," said Hilaire Belloc, "He should have resisted and lost his throne. For there are other things a man may lose."

Despite having many, many illegitimate children with the aforementioned numerous mistresses (all of whom, to his credit, he acknowledged, so far as we know), Charles II's prowess failed to produce a legitimate son or daughter with his queen, leaving the throne to his deeply unpopular brother James. The Catholic James was so unpopular that he was overthrown and replaced with the Protestant William III (of Orange) and Mary II.

Despite Charles having no legitimate children with his wife, he was insistent that she be treated with respect and always sided with her when his Mistresses got above themselves. He also rejected, outright, all suggestions that he should divorce her and remarry.note Catherine of Braganza became pregnant and miscarried at least three times, and during a severe illness in 1663, she imagined, for a time, that she had given birth. Charles comforted her by telling her she had indeed given birth to two sons and a daughter. Her position was a difficult one, and though Charles continued to have children by his many mistresses, he insisted she be treated with respect, and sided with her against his mistresses when he felt she was not receiving the respect she was due. After her three miscarriages, it seemed to be more and more unlikely that the queen would bear an heir. Royal advisors urged the monarch to seek a divorce, hoping that the new wife would be Protestant and fertile – but Charles refused. This eventually led to her being made a target by courtiers. Throughout his reign, Charles firmly dismissed the idea of divorcing Catherine, and she remained faithful to Charles throughout their marriage.

The couple Kit Harington and Rose Leslie are both among his many descendants.

All Say I'm The King, Who Brought Back Troping!

Charles II of England brags about his parties, his mistresses, and how much his people love him for bringing back all the fun things the Puritans banned.

Charles II of England brags about his parties, his mistresses, and how much his people love him for bringing back all the fun things the Puritans banned.