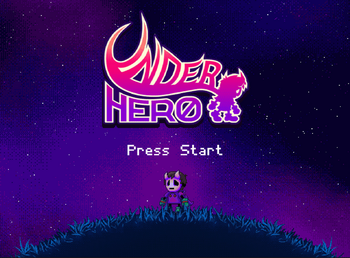 Underhero is a 2D side-scroller Role-Playing Game, made by Paper Castle Games

and released in September 2018, with ports for other game consoles becoming available over time. In it, the player is a nameless Mook of the Big Bad, who is convinced to subvert the plans of their master after the traditional hero has been defeated. The game is quite light-hearted in spirit, while its gameplay is a variant on Turn-Based Combat, where in-combat actions can be taken at any time, but they are limited by stamina.

They may be silent, but their expression says it all...

They may be silent, but their expression says it all...