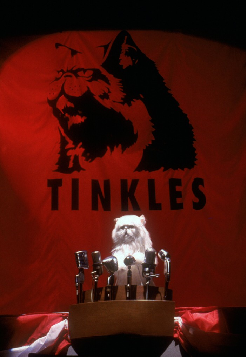 "On each landing, opposite the lift shaft, the poster with the enormous face gazed from the wall. It was one of those pictures which are so contrived that the eyes follow you about when you move. BIG BROTHER IS WATCHING YOU, the caption beneath it ran."
— 1984
Advertisement:

In various media, it seems that certain powerful villains have a rather inflated view of themselves. Sure, the heroes might have their leader's face as a symbol for their team, but the various Big Bads and dictators want to go a lot further than that, and will place their name absolutely everywhere. Their base may actually be shaped like them, the flags may have a stylised icon of the Big Bad in place of the Jolly Roger and heck, they might even have Mecha-Mooks and vehicles very much influenced by their appearance. This trope will also always be used if the whole "cult of personality" effect is wanted, such as in a Dystopia, as shown in works such as 1984 (along, of course, with the gigantic TV screens showing the Big Bad on the buildings and vehicles). There's also a pretty high chance such a villain will rename a city after himself.

See also Cult of Personality, Conspiracy Placement, Shrine to Self, and Sigil Spam.

When combined with a Cool Vehicle, see Faceship.