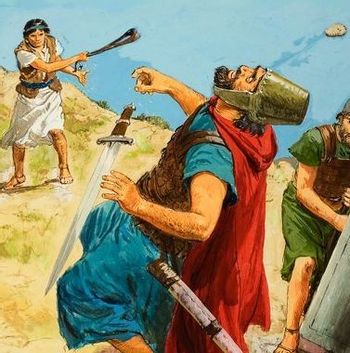 Goliath bites the big one, courtesy of a kid with a sling.
Advertisement:

A sling is essentially two strands of rope connected by a pocket. You place a stone or other projectile in the pocket, whip the contraption around, and let go of one end of rope, letting the bullet fly. It’s an easy weapon to make and requires no materials more advanced than cords and a fabric pocket, making this trope at least Older Than Feudalism; given that the story of David and Goliath may date back to around 1000 BCE, it may well be Older Than Dirt.

Although slings require considerable training to use effectively, since timing when to let the projectile go is key when it comes to aiming properly, they are quite lethal (just ask Goliath) and have an extremely long range of about 400 meters, which is longer than the vaunted English longbow and only outranged by the very best composite bows. Much like how bows would be supplanted later on by firearms, slings fell out of use due to the significant training requirements, as many sling-using ancient cultures began training while they were children. The concussive force they imparted certainly would have been more effective than early arrows against armor and shields of the time even if they failed to penetrate, especially in the case of lead bullets, and there's speculation the hard-to-see rounds would have had a unique psychological impact on foes. Despite all that, slings are generally perceived as a weak weapon in fiction. They are usually given to kids, beginning adventurers, angry peasants, or idiot Mooks, and are very rarely treated as the lethal weapons that they are in real life. This is probably due to confusion with the slingshot, a child's toy that is about as lethal in real life as a sling is in fictionland.

When a sling is used in fiction, the slinger will always whirl it round and round several times before loosing the bullet. This is just for show— in reality, the more (and faster) it's swung, the less accurate the aim — the point of a sling is (basically) to make your arm longer, thus increasing the speed and power of your throw. No more than two rotations are usually required.