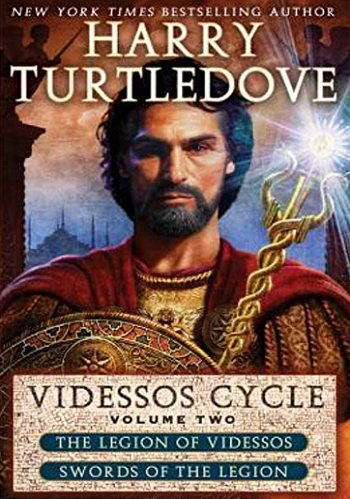 A fantasy setting with a twist by Harry Turtledove.
Advertisement:

The first four books, known as The Videssos Cycle, started out as a Fan Fic of The Lord of the Rings by the young Turtledove in The '60s, in which the Witch-king of Angmar comes back from the dead after centuries and is the new antagonist for Fourth Age Gondor - only for a Roman legion to end up being transported through time and space to appear in the middle of this intrigue and conflict.

Turtledove then went to university and studied the history of the Byzantine Empire. He went back to his old story and created a new fantasy setting based on a fantastic version of Byzantine history (which is such an obscure subject to most Westerners that often only scholars could spot his references). The Big Bad was also reworked, though he retained two characteristics from the Witch-king: he never reveals his face, and he has a similar name ("Avshar"). The Videssos Cycle were some of Turtledove's first published novels, following the adventures of Marcus Aemilius Scaurus' Roman legion as they find themselves in this mysterious, decadent oriental empire - which, in a touch of dramatic irony, is but a fantastic version of the future of their own nation.

Since the publication of the original Cycle, Turtledove has written many short stories and novels which are all set before the Cycle books and deal with Videssian history before the magical appearance of the Romans.

The complete Videssos saga at present is as follows:

Bridge of the Separator (standalone, 2005)