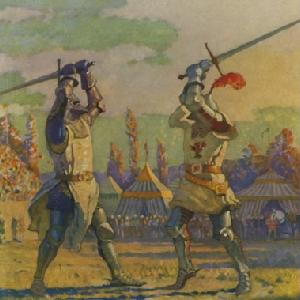 From the Illustrations by N.C. Wyeth
A historical novel by Arthur Conan Doyle, set during the Hundred Years' War. It mainly follows the adventures of Alleyne Edricson, who is squire to Sir Nigel Loring, and two of his comrades: Samkin Aylward and Hordle John as they travel across France to meet up with the eponymous White Company. Along the way, they have a quite a number of chance encounters, whereby much honor is gained through noble deeds and feats of arms.
Advertisement: