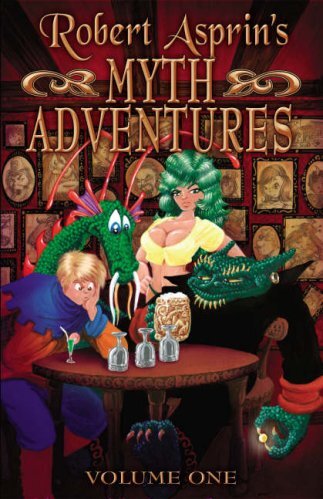 Myth Adventures is the collective name of a series of humorous fantasy novels by Robert L. Asprin, popular for their whimsical nature, myriad characters, and liberal use of puns. The center around the (very very) diverse adventures of Skeeve, a journeyman magician from the dimension of Klah (who learns about demons very shortly after his mentor dies), and Aahz (short for Aahzimandius), a demon (short for "dimensional traveler," as it is explained) from the dimension of Perv (making him a Pervect, thank you very much).
Advertisement:

The title of each novel contains some sort of wordplay on "miss" or "mis-" or "mess" (in the first novel), The "first" series contains twelve novels:

The even "newer" series, written solo by Nye after Asprin's death:

Additionally, the first novel was adapted into an eight-part graphic novel by WaRP Graphics (publishers of ElfQuest) in the mid-80s, illustrated and heavily rewritten by Phil Foglio, who also supplied illustrations for many of the novels. This was the only part of the graphic adaptation to make it into full-color bound volumes. Four more issues followed, with art by Jim Valentino, attempting to bridge the action between the first and second novels. The second novel was later adapted into another eight-part comic series by Ken and Beth Mitchroney and published by Apple from 1987 through 1989. Foglio's comics were once posted at his website.