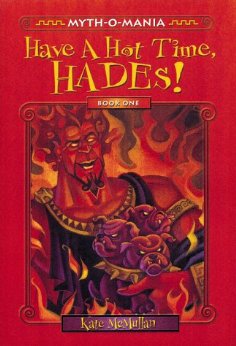 "K.H.R.O.T.U, King Hades, Ruler of the Underworld, that's me."
When it comes to the Greek Myths, things aren't always what they seem.
Advertisement:

Lots of people (or at least those who are especially interested in that sort of thing) have some knowledge of Classical Mythology. Many of the myths feature brave heroes and the mighty Zeus, who rules on Mount Olympus. But in this children's series by Kate McMullan, Lord Hades, Ruler of the Underworld, tells you the real story of what actually happened. The myths we've all heard are a pack of lies told by Zeus, the biggest myth-o-maniac (old Greek-speak for "liar") ever, to make himself look good. And he only got to be ruler of Mount Olympus by cheating at cards!

The Myth-O-Mania series provides examples of: