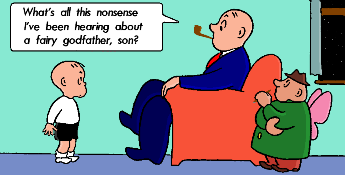 A comic strip created by Crockett Johnson which ran from 1942 through 1952, and was later revived in the early 1960s. It centered on Barnaby Baxter and his fairy godfather, Mr. Jackeen J. O'Malley.

Barnaby is a curious and good-natured child who, after hearing a bedtime story regarding a fairy godparent, wishes for one of his own. This prompts Mr. O'Malley to fly in through his bedroom window. Not only is Mr. O'Malley incompetent, but he also seems hardly able to do magic at all. He generally ignores or shoves aside Barnaby's requests in favor of rambling on about the events of his own life or raiding the Baxters' icebox. What little magic he can do requires the consultation of a pocket guide and ends up backfiring; even his flying is erratic and low to the ground. Barnaby doesn't seem to mind this; O'Malley is rather good company, and what little he can do is impressive on its own.

Ellen and John Baxter, Barnaby's parents, seem hell-bent on disbelieving O'Malley's existence, even once he is elected their councilman and takes over the engineering plant John works at. O'Malley, they believe, is merely a figment of Barnaby's imagination. They are wrong, but attempts to prove otherwise are usually undermined because O'Malley is just out of their line of sight or they leave just as he shows up.

O'Malley is not the only mythical creature. Gorgon, the family dog, has the gift of speech. Unfortunately, he rambles more than Mr. O'Malley and eventually has to be bribed into shutting up. Gus the ghost is scared and intimidated easily. Launcelot McSnoyd is an invisible leprechaun with a heavy Bronx accent who often pokes fun at O'Malley's incompetence.

After the comic spent nearly thirty years out of print, both in reruns and in book form, Fantagraphics Booksnote Which is responsible for putting out complete collections of Peanuts, Pogo and Krazy Kat, amongst other older comics began releasing The Complete Barnaby Collection in June 2013.