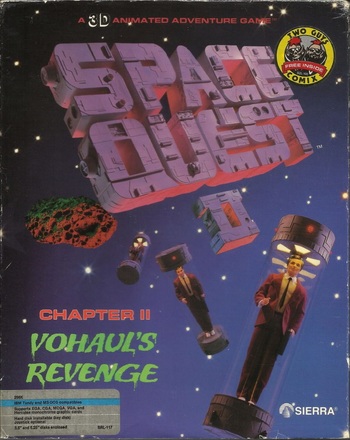 Roger Wilco faces his greatest threat yet; INSURANCE SALESMEN!
Space Quest II: Vohaul's Revenge (also simply known as Space Quest II) is the second game in the Space Quest series, released in 1987. After the events of the first game, Roger Wilco is transferred to Xenon Orbital Station 4 and promoted to head janitor. However, an evil alien named Sludge Vohaul captures Roger for foiling his plan in the first game. Roger manages to escape, but realizes that Vohaul has another plan to obliterate Xenon. It's up to Roger to foil his plan at all costs.
Advertisement:

Received a Fan Remake from Infamous Adventures in 2011.