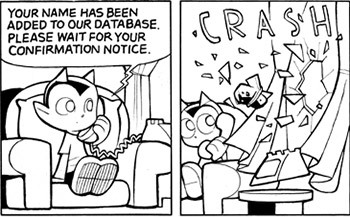 A character orders something (that they will likely end hurting themselves with) and places the order in the mailbox/calls it in/whatever you can think of. The ordered goods will be delivered within seconds. At its extreme, the character places their order form in the mail box, closes it, and then opens the mailbox again to pull out what they ordered, without any postal carrier even touching it.

Please do not confuse this with Express Delivery or any other childbirth-related trope. May be an Acceptable Break from Reality in a Video Game.