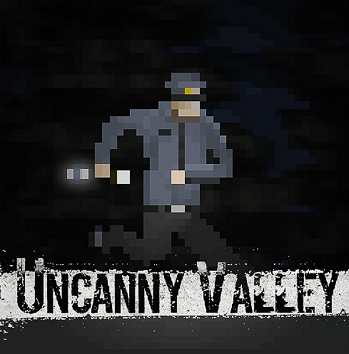 Uncanny Valley is a pixel art Survival Horror game, developed by Cowardly Creations and initially released for PC on April 23rd, 2015. It was then ported to Playstation 4 and Playstation Vita on February 7th, 2017, to Xbox One on February 10th, 2017 and to Nintendo Switch on December 25th, 2018.
Advertisement:

In this game you play as a man named Tom - Tom apparently got involved in something horrible back in the city, and as such he's hiding out in a rural town, where he's taken a job as a security guard at an abandoned factory. While he questions the need for security at an abandoned facility, he needs the money, and continues the job anyway. However, in between his almost prophetic night terrors, a constant bad feeling and slowly finding little hints that something very wrong may have occurred in the factory, he must uncover the truth behind this place and what it's trying to hide.

Despite the name, it is not to be confused with the Uncanny Valley trope. (Though it does contain it at points.)