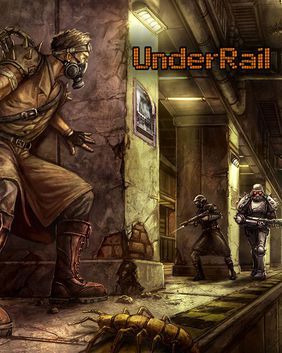 Underrail is an old school turn-based Western RPG developed and published by the Belgrade-based indie developer studio Stygian Software that throws the player into a dystopian post-apocalyptic world deep underground. According to the developers, the game has lots of influence from Fallout, System Shock, Arcanum, Jagged Alliance (for the tactical aspect), and many other computer RPGs of the '90s, and it shows. It was first released in early access in late 2012, before officially releasing in December 2015.

An unknown length of time into the future, life on the surface of Earth has been made impossible. In order to survive, biotechnology superconglomerate BioCorp constructs the Underrail, a titanic system of self-sufficient habitats, laboratories, industrial facilities, and support structures, deep within the Earth.

Three hundred and some years after the Descent, Old BioCorp has fallen, destroyed by both the myriad issues facing the Underrail and the rampant corruption in their upper ranks. Humanity now clings to life in isolated station states, self-governed communities that represent the last bastions of a fading civilization.

You are a newly-admitted citizen of the South Gate Station, a pacifistic but well-equipped station in southern Underrail. After receiving great aptitude results from tests applied by various specialists, you are called to duty by SGS's leaders in order to put your skills to the test. When a mysterious object triggers a mounting conflict between the various factions of the Underrail, you are tasked with locating and retrieving it; as you pursue it across the underworld, you become increasingly involved in the Underrail's nightmarish dangers, political intrigues, and conflicts.

The game is notable for its complex story, absolutely brutal difficulty, and the "Oddity XP" system, which completely averts Level Grinding. Instead, it encourages the player to explore, granting XP solely by discovering unique "oddity" items; these are found in a great variety of environments, or as unique loot from enemies. It's still possible to enable "Classic XP" to gain experience from killing enemies, but the oddities found don't grant as many points.

An Expansion Pack, Underrail: Expedition, was released on July 22, 2019. Featuring a new story that unlocks mid-game, you'll be able to take a break from the usual metro-crawling to take a boat to the infamous Black Sea, a massive underground body of water. The Black Sea features vicious fauna, ruins of older civilisations, natives, pirates, and something far more sinister than all of those.

On 11th March 2020, a new standalone campaign/sequel to the game titled Underrail: Infusion was announced. It will feature an entirely different part of the Underrail, and a revamped, updated game engine.

Not to be confused with Undertale. Despite both games being set underground, Undertale homages a different sub-genre of Role-Playing Game.

. The game can be found on Steam