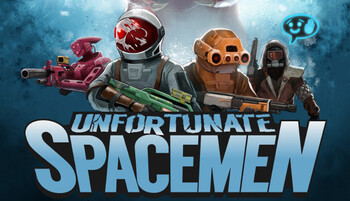 Unfortunate Spacemen is a Survival Horror chiefly-mulitplayer game by Geoff Keene and Sandswept Studios, published by New Blood Interactive. Centered around the exploits of some employees of an interstellar corporation known as The Company, it has a few different gameplay modes available:

Always remember, humans — one of these tropes is worth more than your whole life! So don't forget them: