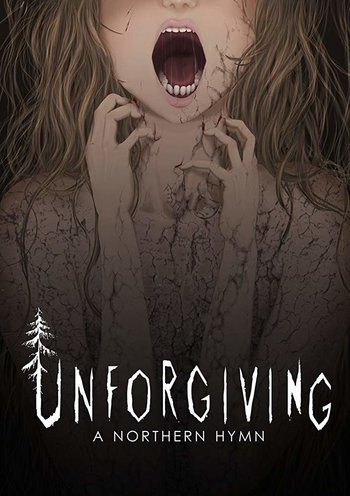 Are you brave enough to face the darkness in your soul?
The choices that we make
can our very soul break
to be judged by the dead and the living.
The twist and turns of life
like cuts from a sharpened knife
relentless and endlessly unforgiving.
Advertisement:

Unforgiving: A northern Hymn is a Swedish first-person perspective horror game based on Scandinavian folklore and mythology. It was created Angry Demon Studio and released on PC through Steam in 2017. The gameplay lacks combat, and is largely based around avoiding enemies by stealth. The dialogue is entirely in Swedish, with subtitles available in multiple languages.

The game proper starts when the protagonist, a young woman named Linn, wakes up with her hands bound in the backseat of her brother Lucas' car. When she realizes she is being kidnapped by Lucas, Linn kicks her brother in the back, making him lose control and crashing the car in the middle of a dark, sinister forest. After explaining that the kidnapping was part of Lucas' attempted intervention to stop Linn's drug addiction by taking her to the family cabin, the siblings decide they have to find their way through the woods. However, it soon becomes clear that they are not alone in the dark, northern wilderness where ancient evils lurk both without and within.

Shares the same universe as Apsulov: End of Gods.