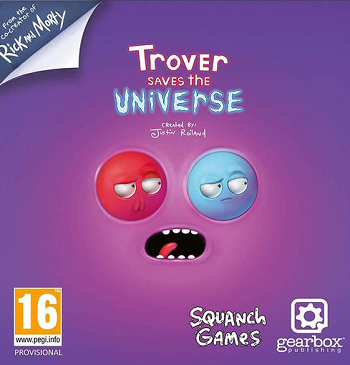 Trover Saves the Universe is an Action-Adventure game created by Squanch Games, a new studio formed by Justin Roiland, the co-creator of Rick and Morty. It was released on May 31, 2019 for Playstation 4, with the PC version released for June 4th, 2019, and features extensive VR support. A VR standalone version was released for Oculus Quest on June 28th, 2020.
Advertisement:

The game's meta-humour begins with the actual protagonist being an unnamed, unseen Chairorpian, a member of the humanoid species who never leave their seat, and who puppeteers the titular Trover through the same sort of gamepad you would be using to play the game in real life. You are doing this in order to retrieve the two dogs stolen by Glorkon the Abstainer, who placed them into his eyeholes in order to finally gain the power he needs to fulfil his dream of destroying the universe. The other Abstainers are not cool with that, however, and so they provide Chairorpian with Trover, as there's nothing better than an Eyehole Monster for freeing your dogs.

It only gets weirder from there.