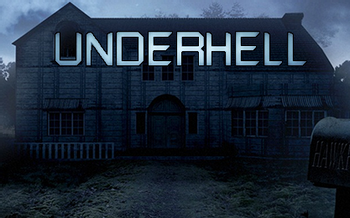 Underhell is a horror-action mod for Half-Life 2, with a large number of gameplay styles. Its first release was on March 5, 2011 containing the Prologue. The second release was on September 1, 2013, containing the first Chapter. Unfortunately, it has since been stuck in Development Hell.
Advertisement:

In Underhell, you assume the role of Jake Hawkfield, a SWAT officer who has recently lost his wife in an apparent suicide. The Prologue takes place one week after this, with Jake responding to a call to a hostage situation at a local hospital. However, it quickly becomes apparent that there is something bigger than a random act of terror going on. Chapter One picks up shortly after the events of the Prologue, with Jake arriving at the mysterious and top-secret A.R.C. complex. Shortly after Jake's arrival, a mysterious virus begins to spread out of control, zombifying nearly the entire population of the complex, save a few security guards and civilians who he must team up with to survive. Of course, this turns out to be something bigger than a simple zombie outbreak, as soldiers move in to "disable" the group, and discerning the truth becomes more and more difficult.

Underhell's gameplay is split up into three sections: The House is a horror-themed adventure where Jake must uncover the secrets of his house and shed light on the mysterious circumstances surrounding his wife's death, all the while being stalked by her ghost. The Dreams are a series of puzzles where Jake explores his own mind and uncovers the memories of his mysterious past. And The Chapters are where the majority of the story takes place, and is a horror-fps with some tactical elements mixed in.

The mod's official site can be found here.