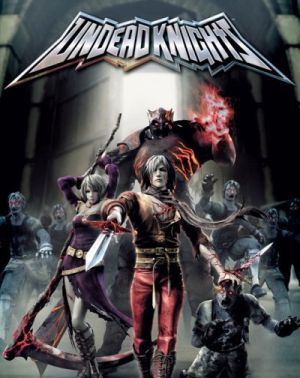 A Hack 'n Slash game developed by Team Tachyon for the PlayStation Portable in late 2009. Some describe it as "Pikmin with zombies", others as "a Japanese take on Overlord".
Advertisement:

It stars Romulus Blood, a dutiful and loyal knight who speaks out against injustices committed by King Gladys (and his domineering new wife) and is unceremoniously murdered, along with his brother Remus and Remus' fiancee Sylvia Gladys (on their wedding night, no less). The event was known as the Marriage of Blood. However, all three make a deal with a demon and are brought back from the dead as Undead Knights. They are given the power to turn living humans into slavering zombies simply by grabbing and holding them for a short period of time, and set off to make the kingdom of Cavalier and all her allies burn.

This turns out to be an incredibly useful ability and the main focus of the gameplay. The Bloods are able to command their minions in a variety of ways; beefy mid-boss that you can't take on your own? Sic your army of minions on him! Something huge coming your way? There isn't a problem that can't be solved by throwing enough zombies at it! Archers have you pinned down in a courtyard killing ground? You can order your zombies to bash down the archer blinds or better yet, get your own hands dirty with a minion as your willing shield!

The entire game takes after schlock horror flicks such as the Evil Dead series in all of their cheesy glory, something the developers cited as their inspiration for making it.