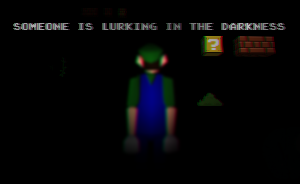 , is an entire source mod fangame based around a Vinesauce inside joke, with complete abandon of the relatively lighthearted tone from the source material.

The game itself is a psychological thriller, where you play as Luigi with severe mental problems (stemming from his terminal brain cancer) through varying gameplay changing levels and sometimes psychedelic or downright bizarre environments.

The story and premise revolves around Luigi escaping Bowser's fortress to reunite with his brother at home, combating Bowser's minions on the way, or so it may seem. A more truthful telling of these events unfold during the third act.

Advertisement:
"So, I got a little terminal 7? Alright! I'll tell you what. I'm going terminal 8 now! TERMINAL 8!"