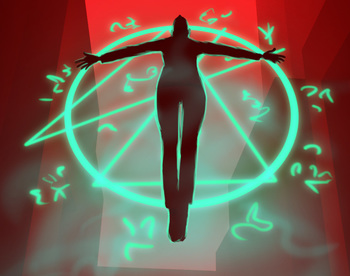 "That's me. Totally harmless"
An individual who suddenly finds himself or herself thrown into the world of the supernatural. After meeting Eli and Mandana, the protagonist understands that his or her body was possessed by a demon named Melkhiresa, which spent a year doing horrible things in the protagonist's body before being exorcised. The protagonist thus joins the Unavowed to defeat Melkhiresa and right the demon's wrongs. However, it later turns out that this is backwards—the protagonist is Melkhiresa, an innocent knowledge demon who was summoned by a sociopathic human. The human used Melkhiresa's knowledge to commit atrocities, and Melkhiresa thus decides to continue on and defeat the sociopath. 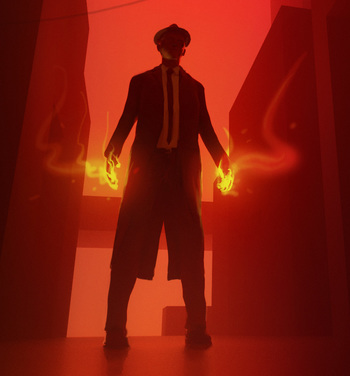 "Fire away."
Voiced by: Frank Todaro

A Fire Mage who has lived for over 90 years and yet still has the body of a younger man. He can be cocky and witty, but he also bears angst over having had to fake his own death and let his family grow up—and in some cases, grow old and die—without him. He also worries about becoming similar to his great-grandfather Aldin, an unhinged psychopath who used fire magic to cause immense devastation. 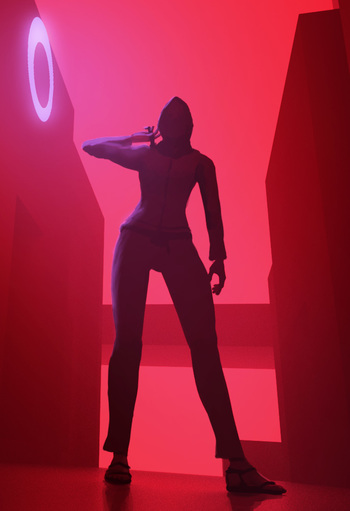 "You speak the truth."
Voiced by: Sandra Espinoza

A warrior whose father was a Jinn and whose mother was a pirate queen. Mandana is one of the Unavowed's best fighters, but she worries sometimes about being caught between the human and Jinn worlds without having a sure footing in either one. 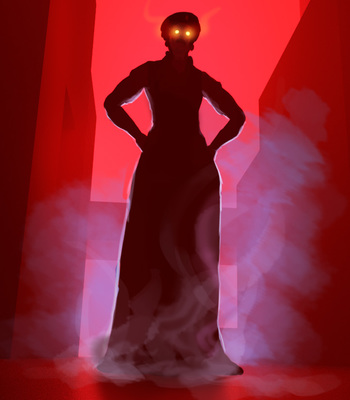 "I am Kalash"
Voiced by: SungWon Cho

Mandana's father, and the leader of New York's branch of the Unavowed. He can be harshly critical of the team when he thinks they have erred, but he nonetheless believes in them and trusts them to help keep New York safe. 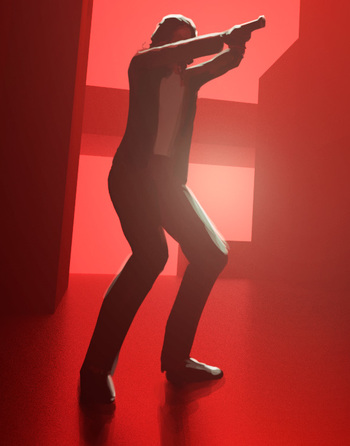 "Shit. What a mess."
Voiced by: Arielle Sieger

A police detective from Staten Island who (depending on your backstory) was shot during the wicked spirit's initial rampage. After healing, she discovered that she could see ghosts, and also that she seemed to be the only one in her precinct who cared about all the bodies piling up on Staten Island. After she sees the Unavowed fight the monster preying on her community, she joins up. 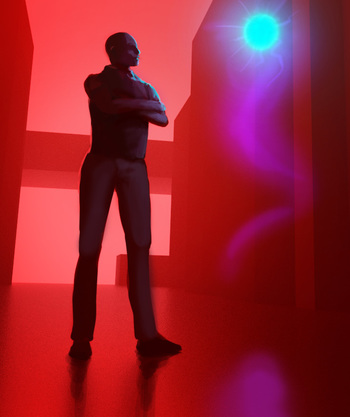 A former alcoholic who is still tormented by his inclinations towards drinking. After his brother's suicide, Logan became able to talk to ghosts and—with the help of KayKay, his spirit guide—help them move on. He did this for about a year until he was trapped in a house with three angry ghosts; after being rescued by the Unavowed, he signed on to their team. 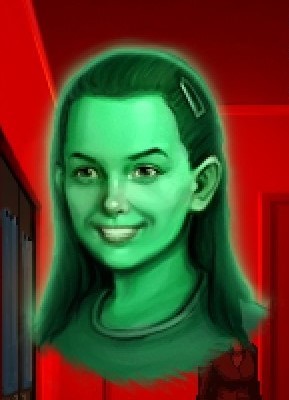 Logan's spirit guide. KayKay died when she was about 10, but she nonetheless maintains a playful and cheeky personality. When the chips are down, though, she's always willing to help Logan and his friends solve problems and save the day.

Aralax
A dragon leading the Dublin branch of the Unavowed.

Family of the Unavowed:

Aldin
A monstrously evil Fire Mage who laid waste to entire villages. He is the great-grandfather of Eli.
Keara
Voiced by: Ally Murphy

A pirate queen who ruled the seas around Ulster, Keara was also Mandana's mother.

Vicki's brother, who is also a police officer.

Serena
An actress who is upset about Zack rewriting the play with the show's opening just a week away.
Morey
Voiced by: Cyrus Nemati

Another actor who is frustrated by the rewrites.

A playwright who, in a fit of desperation, summons the muse Calliope to give him inspiration. This goes badly for him, as he finds himself compelled to work without eating or sleeping in order to satisfy his creative urges.

Host of the Eternox Club.

A police officer who, frustrated with his lackluster record, has begun using magic to compel people to commit crimes and to brainwash civilians into thinking he heroically saved the day from those same "criminals".

A bar manager. After one of her regulars locks himself in the bathroom in the middle of what seems like a mental breakdown, she asks one of her bartenders to get him out, but then things go horribly wrong.

A monster from another world. While on Earth it must eat human flesh to survive, which naturally brings it into conflict with the Unavowed.

A police officer standing guard in front of a burned-down orphanage.

A homeless guy who was tormented by a deep chill that he couldn't seem to shake. He wound up joining a cult in which a 'master' cast a spell that beat back the illnesses afflicting him and the other members, but when the master left and put Jordan in charge, he wasn't able to perform the spell... leading to disaster for all concerned.

Wendy
Jordan's girlfriend. After he gave up and left the cult, she tried to take over, but was no more capable of performing the ritual than Jordan was.
Harry Taylor
Another cultist.
Humming Girl
A girl who is sitting in the park and humming in the rain.

A police officer guarding a body on Staten Island.

A bartender on Staten Island. His wife Marlene was killed in General Zarug's wars.

Vinny's wife. She was thrown into General Zarug's world and made to fight in the war there, where she was killed.

Captain of the Staten Island precinct. She made a bargain with General Zarug, obtaining magical powers from him which allow her to brainwash others and thus advance her career, and sending him people to fight and die in his army in exchange.

A mer-folk general who is fighting a war against another force, but—on account of his forces being unable to move on land—is losing. He makes a deal with Harrison; in exchange for magic, she will provide him with humans that will be drafted into his forces.

A Metropolitan Transit Authority worker who used to be a policeman.

A student who cares a great deal about her grades.

The husband of Jess Eddings.

The wife of Art Eddings.

An angry dryad who once tried to violently prevent any humans from disrupting her forest by settling on Manhattan Island, only to be stopped by Kalash. Despite being restricted by the Jinn to a small patch of woods, she survived and is out for revenge.

A baker who finds himself driven to push the limits of his craft.

A police officer and friend of Clay's.

A young girl who finds herself driven to express herself via chalk drawings, no matter the hour or the weather.

May Stein
Voiced by: Miranda Gawin

The mother of June.

A man who became obsessed with May Stein. He used his artistic talents to draw her in an effort to express his appreciation of her beauty, but as his sanity degenerated and he began filling their apartment with an absurd number of drawings, he only freaked her out.

An ancient muse who recently lost her powers and is taking the opportunity to produce and consume art instead of simply inspiring it.

An old retired painter who has been mentoring many of the artists in the neighbourhood.

The distraught mother of Elijah Cook.

The father of Elijah Cook and husband of Winnie. He is also Eli's grandson.

Founder of the Grant City Trust, a major financial institution based in Wall Street.

A security officer manning the front desk of the Grant City Trust.

A former Vice President of the Grant City Trust. After being put on a special assignment by Fellows, he set fire to his paperwork, was sacked, and wound up ranting incoherently on the street outside the building.

The human alias of one Robin Goodfellow, a powerful fae leader. He wants a child and resorts to evil means to obtain one.

The bodyguard and nanny that Fellows creates for Elijah Cook.

A man who helps run his parents' grocery store.

A detective eating at Wing's restaurant.

A chef who won the lottery several years prior and used it to pay off her debts.

The son of two restauranteurs. After they were killed by the demon, Kevin was blamed for their deaths and arrested. Unfortunately, he had summoned the Ba Jiao Gui just before the shooting and didn't have time to dismiss it before being taken into custody. It now haunts his dreams demanding a freedom he can't give it.

The officer stationed in the front room of the Tombs.

An officer in the secure area of the Tombs.

A second officer in the secure area of the Tombs.

A dragon who is known as the Ba Jiao Gui, or the 'Banana Ghost.' When summoned it can provide winning lottery numbers to the summoner, but if it is not then promptly released, bad things start to happen.

The monster that is causing all of the problems in the city which the Unavowed are trying to fix. Identified as the knowledge demon Melkhiresa early on. Eventually revealed to be a sociopathic human who was just using Melkhiresa's knowledge. Eli tried to exorcise Melkhiresa, but — since he specifically used magic to exorcise a "wicked spirit" — wound up exorcising the human's spirit from his or her own body instead, on account of the human's immense wickedness. This left Melkhiresa in possession of the body, which the wicked spirit then plotted to regain.