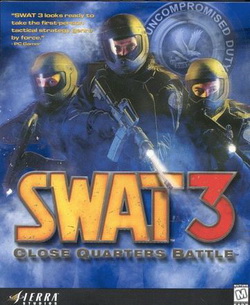 SWAT 3: Close Quarters Battle was the third installment in Sierra's S.W.A.T. series, the more action-themed spinoff of their previous Police Quest series. Developed by the Sierra Northwest studio and published in 1999, this game was in many ways a milestone in the series: it was the first SWAT game to be a squad-based tactical First-Person Shooter, the last SWAT game to be set in Los Angeles and be developed by an in-house studio of Sierra, and one of the more successful and acclaimed tactical shooters of the late 90s following the subgenre's inception with the previous year's release of Rainbow Six.

GOG.com and Steam both now

the Tactical Game of the Year Edition available for ten dollars.

For the series that this game descended from, see Police Quest.

Red team, stack up and prepare to move: