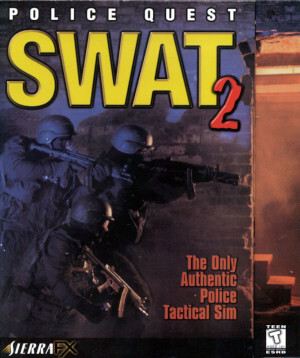 Police Quest: SWAT 2 (1998) - Three years after the release of the first Police Quest: SWAT game, the Sierra-owned studio Yosemite Entertainment brought the SWAT series back. While its predecessor was an interactive movie, SWAT 2 is an isometric real time tactics game where you command individual combatants as a Non-Entity General during typical SWAT crisis situations.

The main features of SWAT 2 are the two 15-mission campaigns for Los Angeles SWAT and a fictional Western Terrorist organization called the Five Eyes. Gameplay is divided between personnel management (funds, equipment, training, mission assignment) and tactical encounters where SWAT and criminals clash. Personnel must be rotated or replaced as they recover from injuries or (as in real-life SWAT) are suspended while a fatal shooting is investigated.

The two sides play quite differently. SWAT prefers a nonlethal approach and imposes heavy penalties if even a single officer, innocent, or nonthreatening suspect is killed during a mission. Conversely, the Five Eyes desires mission completion at any cost, with little care for innocent or terrorist deaths as long as the job is done.

Of particular interest, you are not obligated to succeed at every mission in order to complete the campaign. Good performance earns money while poor performance costs money, but you may continue as long as your bank account remains in the green.

For its Tactical Shooter successors, see SWAT 3 and SWAT 4.

For the series that this game is a part of, see Police Quest.