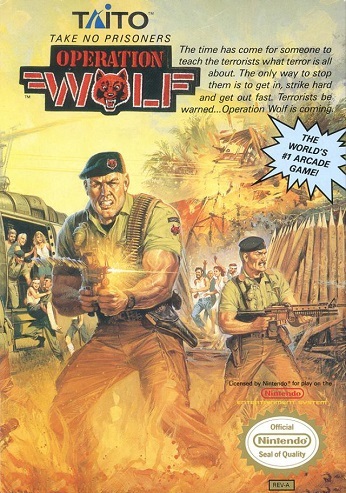 The Operation Wolf series began as a Light Gun Arcade Game by Taito in 1987 with Operation Wolf. In it the player is a Special Forces soldier that arrives in a Banana Republic country to rescue hostages.

The first sequel, titled Operation Thunderbolt, featured the same protagonist and another Special Forces squad mate as they infiltrate the north African country of Karubia to rescue more hostages from a different group of soldiers. This game was released in 1988.

The next game, Operation Wolf 3, was released six years later exclusively to arcades in 1994 and featured a big shift in tone. This time, two special agents are charged with taking down a nuclear threat from the terrorist organization known as SKULL.

The last game of the series to date is the arcade exclusive title Operation Tiger which was released in 1998. Tiger has the player take out yet another terrorist organization that wants to use chemical weapons unless their demands are met. The player must assault their heavily fortified base and rescue the soldiers from the first team that attempted the Operation.

Wolf and Thunderbolt are unusual in the light gun genre in that the players were forced to work with a limited amount of bullets and rockets. While ammo refills could be obtained by shooting obstacles or completing certain stages the games required players to be precise and accurate with their shooting. Running out of ammunition would not be an automatic death sentence but failure was almost guaranteed in that situation.

Wolf 3 took place in a more industrial setting and got rid of the ammunition gimmick. Instead, the players had unlimited bullets but would be required to periodically stop firing to retain their maximum firing speed. This is also the only game in the series to use digitized actors and backgrounds.

Since this page has no tropes left, you must join the hostages.