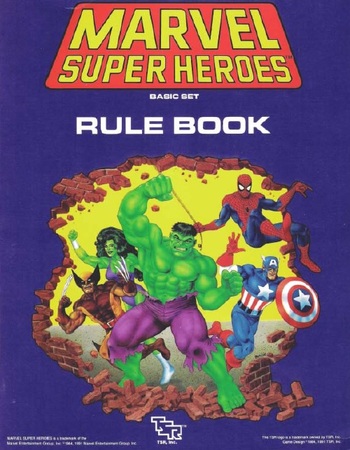 Marvel Super Heroes is a tabletop role-playing game designed by Jeff Grubb, written by Steve Winter, and set in the Marvel Universe. Its first edition was published by TSR in 1984,and followed by an expanded edition, the Marvel Superheroes Advanced Game, in 1986. A new game was released in 1998 called the Marvel Super Heroes Adventure Game, utilizing the same card-based SAGA system as Dragonlance: Fifth Age.
Advertisement:

The basic game is designed to allow players assume the roles of Marvel superheroes, whose origins fall into one of five categories: Altered Humans (normal people who acquired superpowers), High-Tech Wonders (normal people whose powers come from devices), Mutants (people born with superpowers), Robots (created beings), and Aliens (non-humans, including extra-dimensional beings). These origins determine the upper limits of a character's superpowers, which otherwise function on an ad hoc basis. In addition to playing as established Marvel characters, players are also given the opportunity to create original characters.

Most game situations are resolved by rolling percentile dice and comparing the results against a column of the "Universal Results Table", with the column used determined by the Attribute used. Each character has seven Attributes—Fighting, Agility, Strength, Endurance, Reason, Intuition, and Psyche—which give the game system its nickname of FASERIP.

The system was also spun off into a Gamebook line that ran for 8 installments, each featuring the player controlling a prominent Marvel hero using a version of the same attribute system with simplified number values.