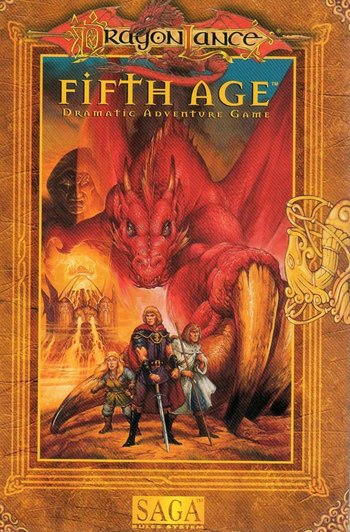 The Dragonlance: Fifth Age Dramatic Adventure Game using the SAGA game system made its debut in 1996. One of the most notable things about the system was that it used a special deck of cards called the “SAGA Fate Deck” that had artwork depicting various Dragonlance characters instead of dice. The other very notable feature was that the magic system was freeform compared to AD&Ds spell lists. So a spellcaster could create whatever effect they could think of as long it was within a School of Sorcery or Sphere of Mysticism they knew. The game was made to move Krynn into a new age, one in which the gods are gone, and the Dragon Overlords have taken over most of Ansalon, but there is still hope, as mortals have discovered a new kind of magic, the magic of Primal Sorcery and Mysticism. The game was also released around the same time as the Dragons of a New Age Trilogy by Jean Rabe; the trilogy told the first tale of the Fifth Age.
Advertisement:

The game system was very controversial, as it not only moved Dragonlance away from being based on Dungeons & Dragons, but it also drastically changed the setting. There was a lot of fan backlash against the game itself, as well as the author of the Dragons of a New Age Trilogy Jean Rabe. It was not to last. Game supplements were produced for the ruleset, and it did have its share of fans, but eventually it was decided that the line should be cancelled. Dragonlance was eventually revived as a game setting under the Dungeons & Dragons 3.5 ruleset, which contained rules for running games in either the Fifth Age or the classic War of the Lance era.

Tropes that apply to the Dragonlance Fifth Age RPG include: