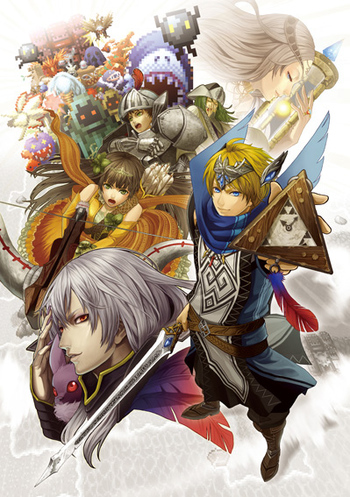 Time waits for no man, unless you pay her enough.
Advertisement:

Half-Minute Hero is a Retraux Puzzle Game / Eastern RPG for the PlayStation Portable.

You are a Hero. During an otherwise normal adventure, an Evil Lord attempts to cast a spell that will destroy the world. The spell takes thirty seconds to cast. Therefore, you have thirty seconds to Save the World. But you can't grind enough levels or even move fast enough to get to the Evil Lord in time! You fail, and the world is destroyed. But that's when things change. As you lay dying, the Time Goddess appears to you and makes you an offer: she'll turn back the clock, give you another chance, and speed you up. In return, you save the world from the Evil Lord by preventing him from casting the Spell of Destruction...and also give her all your money. When you successfully do so, it turns out that there are other Evil Lords, and someone is giving them the Spell of Destruction. Your job has only just begun.

This is the cornerstone of Half Minute Hero, a game which condenses all of the standard RPG tropes into thirty frantic seconds of level grinding, side-questing and monster slaying. Do you rush through the map in order to reach the Evil Lord as fast as possible, at the risk of not being strong enough to defeat him? Or do you chance a time-consuming detour for that Infinity +1 Sword? What about that Quest Giver who could possibly open a shortcut for you? Or the Time Goddess, from whom you can (literally) buy more time? You'll need to think fast if you want to succeed; no-one ever said being a hero was easy, but it is quick!

In addition to this mode (known as "Hero 30"), there are five other modes of play available:

Tropes that apply to the Half-Minute Hero games: